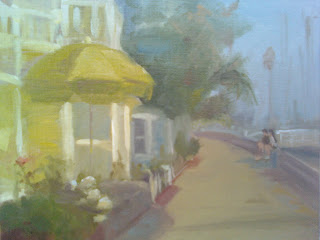 Thought I would post two small (6"x6") studies, that were the result of a challenge from artist Greg LaRock, to "simplify" some of the elements that are within our field of vision. Greg reminds "those of us" (guilty as charged) who tend to paint every last boat and mast in the background, to greatly simplify or possibly eliminate those elements that do not support the focal point. Friends reading this, who paint out on Balboa, know only too well how easy it is to become enchanted by the many boats, houses & people. Andrejs, remember painting the cottages at Crystal Cove? So often, I bury the focal point amidst a lot of detail; detail that can be distracting. I very much appreciated Greg's feedback about this issue of editing a composition, and using a larger brush, to block in the larger planes/passages.

American Artist, Frank Duveneck's philosophy about "simplifying" (he used the term - subordinate), was masterfully communicated by his choice of tools and technique. He began by using a large flat brush, to draw his major shapes on the canvas. He was reported (by students and his wife), to use l/2 to 1 inch flat brushes, that no doubt, facilitated his technique of reducing the face to its major planes. To that end, he encouraged his students to paint "in little planes". Although his guiding philosophy related to the "representation of the figure", Duveneck's attributes of the ideal painting could be applied to most any representational painting. A Duveneck student, Henry Lough Miller, reported these attributes of a painting to be:
- Sculpted by natural light,
- Tonally detached from its background,
- Its detail [be]simplified in terms of its major planes,
- The hair and costume by subdued tonal contrast and reduced modeling - be subordinated to the face,
- The whole - defined by a single unified light and a single unified dark.
Posted by m.s.g